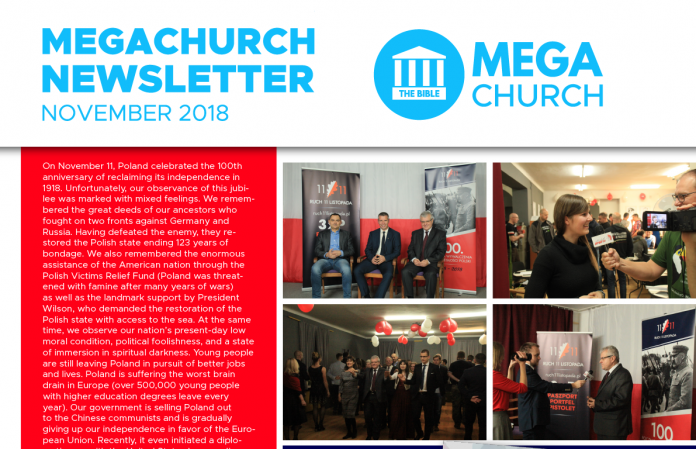 On November 11, Poland celebrated the 100th anniversary of reclaiming its independence in 1918. Unfortunately, our observance of this jubilee was marked with mixed feelings. We remembered the great deeds of our ancestors who fought on two fronts against Germany and Russia. Having defeated the enemy, they restored the Polish state ending 123 years of bondage. We also remembered the enormous assistance of the American nation through the Polish Victims Relief Fund (Poland was threatened with famine after many years of wars) as well as the landmark support by President Wilson, who demanded the restoration of the Polish state with access to the sea. At the same time, we observe our nation’s present-day low moral condition, political foolishness, and a state of immersion in spiritual darkness. Young people are still leaving Poland in pursuit of better jobs and lives. Poland is suffering the worst brain drain in Europe (over 500,000 young people with higher education degrees leave every year). Our government is selling Poland out to the Chinese communists and is gradually giving up our independence in favor of the European Union. Recently, it even initiated a diplomatic war with the United States by revealing confidential correspondence of the US ambassador to Poland, Mrs. Georgette Mosbacher. We recognize prompt, widespread evangelizing and educating new Christian leaders, who would be able to turn the nation away from the path of another downfall, as the only hope for Poland. Yet, we have so little time. You can find out more on the situation in Poland on our English-language channel, Make Poland Great Again: youtube.com/makepolandgreatagain

On Thanksgiving Day, we published our greetings and thanks to those who were our angels during our recent trip to the USA: https://youtu.be/FeT9gFuFIZk.
You can find the account of our journey to the USA through the eyes of Pastor Paweł Chojecki, “Freedom and the Meaning of an Individual” here: http://pawelchojecki.pl/aktualnosci/wolnosc-i-znaczenie-jednostki/
as well as our new interviews, “Why Character First?”: https://youtu.be/A3JZfCDZvDg
and “She Had Escaped Islam from Iran to the UK. After They Accepted the Immigrants, She Ran Away to the USA!”:https://youtu.be/fFNmc79_diA
The new issue of the Go Against the Tide magazine appeared in November. The main topic was “Poland as a Second America”. We recommend the editorial by Pastor Paweł Chojecki, “Transfusion For Poland”, in Polish and English: http://pawelchojecki.pl/aktualnosci/a-transfusion-for-poland/

One of the fruits of our journey to the USA in the media area was launching our new Chicago studio by members of the Polish diaspora:

– an interview with Dan Sexson of the John Birch Society: https://youtu.be/28IcIfBVK-M
-the Chicago Club of Go Against the Tide joined our action #NoToEUArmy: https://web.facebook.com/idzpodprad/videos/520587135113077/
– the East Coast Club of Go Against the Tide picketing in front of the Consulate of Russia: https://web.facebook.com/idzpodprad/videos/2210684309206414/
Another fruit was establishing channels for receiving comments from American politicians and columnists.
We also hosted an Election Night during the midterm elections in the USA.

We placed a billboard in the main street in Lublin saying, “Whom Do You Listen to, the Clergy or the Bible”? When it got vandalized, the law enforcement agencies ignored the case.

We made a new contact with a Jesus-believing Jew, professor Andreas Stutz, who gave an interview for our TV in Polish, “Do Jews Need Jesus?”: https://youtu.be/oukJvsu2LK8 and in English “Ministry of Interior persecutes Christians in Israel”: https://youtu.be/ghYz1SaceVs

After his return from the Unites States Pastor Paweł Chojecki gave a series of sermons addressing the problem of churches permeated with atheist, communist, and globalist ideology. A portion of one of the sermons is available in English: https://youtu.be/-FrNkqTzXXU
Here is its printed version: http://megachurch.pl/news/polish-pastor-pawel-chojecki-warnes-against-communism-in-the-church/

Last month, our clubs organized a number of screenings of the movies, “Genesis: Paradise Lost” and “The Last Witness”. About 200 people showed up in Calgary, Canada to watch the latter one.

Prayer requests:
– For God to expose the intentions of the enemies of Poland, whose purpose is to create conflict between Poland and the Free World, and to drive us back into the bondage of the Eurasian empire.
– For us as a church to develop an effective system of care for new Christians together with valuable materials promoting Christian growth. New believers are coming forward on a daily basis asking for spiritual assistance. A record high number of people coming forward in one day was seven!