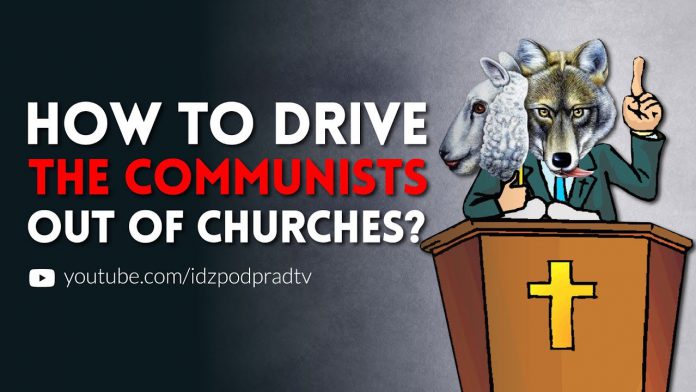 A week after his return from the Unites States, Pastor Paweł Chojecki gave a sermon on how to drive the communists out of churches. One could ask, “What communists”? Are there any members of communist parties in churches? Not necessarily. Enough that preachers express Marxist or socialist ideas that the communists have utilized to secure power and control over minds of billions worldwide. The message was partly motivated by the observation that harmful teachings can now be heard not only in Poland and other European countries, but also at some of the conservative churches in America. This experience helped the group of Polish Christians to recognize one of their new mission goals. They should be warning Americans against the dangers of communism, whose new strategy since the failure of the violent military stage involves ideological warfare. Subversive ideas are clothed in nice-sounding phrases appealing to audiences unaware of the deception. Even preachers may be unwittingly disseminating destructive viewpoints they had received during their training. Yet, history teaches that times of meltdown and soft treatment are only temporary in communism. The steady advance of the communist ideology can’t be ignored or tolerated; it must be recognized and firmly opposed before it is too late. The world is facing a migration crisis; hordes of barbarians pledge the destruction of Christianity and the Western civilization. Still, some ministers find it appropriate to minimize the problem. “Let’s get down with division and up with Jesus’ love”; “As Christians, we make a place for those who need help and who need the Gospel […] and I understand the political issues that we face in regard to allowing people into our borders, but what an opportunity [it is] when people come from a different country to share with them the gospel message of Jesus Christ”; “Patriotism, nationality, right to vote […] there is no place for that in church […] we are not going to talk politics to make us a political platform; we are going to make ourselves a place where we elevate the name of Jesus Christ and the mission of God”, etc. Such statements have an appearance of soundness, but for a trained ear at once they raise red flags. Why? Because they resemble the words and attitudes of some of the top religious leaders, who don’t even attempt to disguise their Marxist, communist, globalist, and antichristian sympathies. The message is so urgent and so crucial that no words are too harsh to deliver it. They should sound like a loud wake-up call.

“Ye are the light of the world. A city that is set on a hill cannot be hid.” Notice that this is concerning the outward role of the Church. It is not meant for the Church to shine its light inside, for itself. That kind of attitude is compared to hiding the light under a basket – the Church speaking only to the believers. This was one of Stalin’s goals. You are allowed to address only your own church members. That means confining the Church to within a building, and muzzling its voice in the public space. In other words, it is banned from playing a role in politics. Any pastor who says, “Do not get involved in politics”, is a satanic tool within the Church, because the Church is meant to be a light not for the believers – for this the believers have the Word of God, “Thy word is my lamp”, etc., right? But the Church, meaning you, we all, are meant to be a light for the world. Thanks to what the Church says and demonstrates, the whole world is to be able to distinguish between good and evil, able to recognize the source of the assault, able to know where to find a shelter, in which direction to walk. This is the purpose of the Christian Church. You must be the light to the world! You can’t be entrenched in your own little church comfort zone. In other words, a church that is not a road sign for the world is a church that has denied Christ and His mission to the world. And now, I will show you what the communists proclaim. You may go to those pastors of yours, who tell you not to meddle with politics, and give them a solid kick… you know where. It’s just a figure of speech. We will revisit this figure of speech at the end.

There we go – the three basic tenets of communism. First, political, right? Since there is a separation of church and state, the politics does not meddle with Church. But what is the main premise of the contemporary politics? “There is no God.” – That is expressly the communist imprint. What is the basic dogma of the state-sponsored science? “There is no God.” “We don’t take God into account.” There is only naturalism. “In research, we can use only our senses and lab glass.” What is a reference to God? “It’s a violation of the canon of science.” Doctor Gazda has violated that canon – my respect. We will talk more about it. “There is no God”, is the first premise of communism, which has metamorphosed today into a variety of humanist and globalist gibberish. But the root is the same, “There is no God”. I will elaborate on it momentarily. The second point concerns your nature. Who are you? If God doesn’t exist, you are an animal, you are cattle. But what is cattle for? The Chinese comrades know it perfectly. Make it into soap. Is it possible? Yes, it is. What about showing their stuffed skins or bodies? Is that alright? Yes, why not? How about organ-hunting? Is that acceptable? Yes, it is. It all comes out of this. It’s happening right in front of our eyes. They want to do so in Warsaw. We talked about it two days ago. You are an animal and you are expected to act like an animal. Yes, you can be sheared like cattle, but you are supposed to behave like cattle. You must act like an animal being driven by its urges. That’s why the mass media constantly exude sexual stimuli – to make you like a dog run after a bitch in heat. This is the communist notion of your behavior. You are an animal and you are to behave like one. Third point – you have no inherent rights, neither freedom nor ownership. The party will give you, if it so pleases. But if not, it will take away. And what will you do? You will stand in attention. The cult of the state is a form of the cult of the communist party. It’s already present in Christianity.

Where will a blind shepherd lead the flock? “If the blind lead the blind, both shall fall into the ditch.” So a pastor, a shepherd, must be informed. He must know what is going on. Do you remember the first episode of the “Character First” series? Alertness, that is vigilance, is defined as being oriented in the matters entrusted to you as the area of your responsibility. A husband must know what is going on with the family, kids, wife, work, etc. A boss of a company must know his area, a chief of a village – his, and so on. A politician must be oriented in his area. A pastor must be oriented in everything. Why did you push for it if you’re a moron? If your brain is the size of a walnut, why did you become a pastor? Pastor must be oriented in everything! Period. Can you see, “blind and foolish, lacking wisdom”? Idiots became pastors! I wouldn’t hire them to a shovel! But they lead churches! “Lacking wisdom, dumb dogs.” It’s not I, who says this, but the Word of God.

Now, we have an example of a godly politician, a godly ruler, who rewards the good ones, and severely punishes in wrath the evil ones. If a politician now says that it should be done the other way around, is it right to say in a church that there is no difference between these politicians, like between an honest person and a thief? Is there no difference? It’s precisely the same methodology. But look, you will hear in churches, “let us not evaluate politicians”. “Oh, some are conservative, other liberal… We are proclaiming Christ to all. Don’t differentiate. Best of all, my lambs, don’t meddle with politics at all. We, the sheep, that is wolfs in sheep’s clothing, will arrange everything for you.” Today, this is the teaching that pastors receive in communist seminaries, and preach in their sermons, both in Poland and, unfortunately, these days also in the US.

Indeed, the situation is very serious not only in Western Europe but also in the United States. Basically, youth educated in public schools and even in private universities can’t see the communist threat any more. For them, the communism is just a nice and friendly concept for improvement of our world. Such rubbish can be already heard over there. Here is, I think, the particular role of Poles. They lived through the communism, or their relatives did. Some of them received a bullet in the head from the communists, or other terrible things. This remembrance remains in our nation, and so Poles should be God’s tools in the battle to save the Church from the communism. We, and a couple of other nations, have personal experience in this area. The screening of “The Last Witness” about Katyń took place in a church. We were very pleased that we were able to show this movie in a church. This is not our last word on the matter. Soon, another screening will happen in Calgary. Jacek and Edyta are organizing it. This is our mission. In fact, it may be that we are the last ones in this struggle. If we lose it now… I’m telling you, there are no others after us. Only the churches are still capable of holding the world communism in abeyance.”