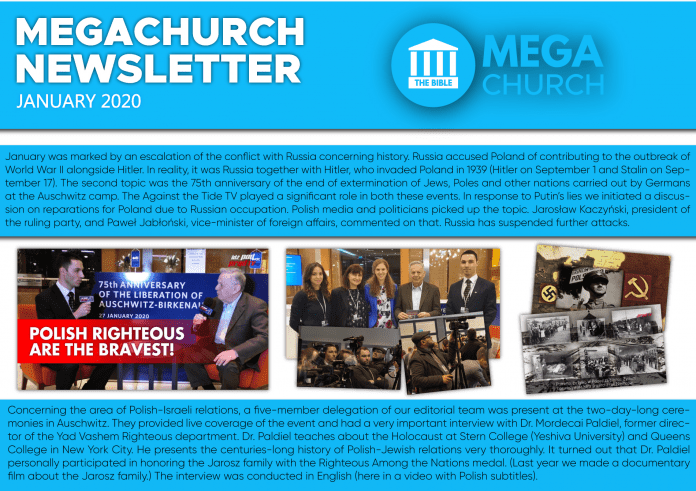 January was marked by an escalation of the conflict with Russia concerning history. Russia accused Poland of contributing to the outbreak of World War II alongside Hitler. In reality, it was Russia together with Hitler, who invaded Poland in 1939 (Hitler on September 1 and Stalin on September 17). The second topic was the 75th anniversary of the end of extermination of Jews, Poles and other nations carried out by Germans at the Auschwitz camp. The Against the Tide TV played a significant role in both these events. In response to Putin’s lies we initiated a discussion on reparations for Poland due to Russian occupation. Polish media and politicians picked up the topic. Jarosław Kaczyński, president of the ruling party, and Paweł Jabłoński, vice-minister of foreign affairs, commented on that. Russia has suspended further attacks.

Concerning the area of Polish-Israeli relations, a five-member delegation of our editorial team was present at the two-day-long ceremonies in Auschwitz. They provided live coverage of the event and had a very important interview with Dr. Mordecai Paldiel, former director of the Yad Vashem Righteous department. Dr. Paldiel teaches about the Holocaust at Stern College (Yeshiva University) and Queens College in New York City. He presents the centuries-long history of Polish-Jewish relations very thoroughly. It turned out that Dr. Paldiel personally participated in honoring the Jarosz family with the Righteous Among the Nations medal. (Last year we made a documentary film about the Jarosz family.) The interview was conducted in English:

We also created a short documentary in English language titled “Things You Didn’t Know About Polish-Jewish History” that is very popular among the viewers. We are encouraging you to promote this material:

The day after the announcement of the Middle East peace plan (only our TV has prepared a Polish version of the speeches given by President Donald Trump and Prime Minister Benjamin Netanyahu) the Embassy of Israel in Poland invited the Against the Tide TV to have an interview with the new ambassador, Alexander Ben Zvi. The interview with the ambassador in English:

Very important words were said during the interview. They corrected a communist-disseminated stereotype of Poland being anti-Semitic. Our film, “Righteous Among the Nations. History of the Jarosz Family,” has been added to the inventory of the Museum of the History of Polish Jews, POLIN.

On the last day of January, we celebrated the fourth anniversary of the daily broadcast on Against the Tide TV. A half-an-hour-long video presenting a brief summary of our activities in 2019 was too short to contain all our accomplishments and successes. Praise God! Enormous development of our TV and the Against the Tide community could be observed in a short time span. Our correspondent from Taiwan, Hanna Shen, summed it up with these words: “The greatest role of Against the Tide is making Poles aware of how much an individual can change and stimulating them to action!” We started airing vlogs by Polish ladies living abroad: in Canada, Great Britain, Austria, and Taiwan, as well as a technology news service about the advances in control over humans by means of technology.

In January, we launched a new billboard campaign promoting our TV, “Against the Tide – Television for the Brave.” The billboard poster features beautiful graphics by our artist, Andrzej Patalon, depicting charging hussars as in the times of the greatest splendor of our country.

The film “Genesis: Paradise Lost” with Polish dubbing reaches ever-growing circles. Recently, a screening of the film took place in Warsaw; the movie theater seating 120 people was full! Other protestant churches interested in the film have contacted us. Praise God!

The Catholic law organization, Ordo Iuris, published a report titled, “A list of most significant restrictions of academic freedom in Poland.” It gave a description of a case of female students belonging to our church. They were subjected to disciplinary action at their university because they attempted to organize a debate between creationist scholars: Professor Andrew McIntosh of the University of Leeds (School of Chemical and Process Engineering) and Professor Stephen Taylor of the University of Liverpool (Department of Electrical Engineering and Electronics), and evolutionist scholars.

In February, we are planning to move to our new location. We are requesting prayers that the new place and new opportunities it brings will result in quick improvements of our TV programs and our ministry.

At the end of February, we are planning a missionary trip to Chicago and screenings of the film “Genesis: Paradise Lost” with Polish dubbing for the Poles living in that area. We are requesting prayers for a rich spiritual outcome of this journey.

For destroying the medio-political conspiracy of silence around the Against the Tide TV. To illustrate both informal and official persecution of non-Catholics in Poland, we presented the case of charges brought by the prosecutor’s office against a Christian parent accused of abusing his children. In the office’s view, the crime involved extensive reading of the Bible to the children, having conversations with them involving worldview-related issues, and refusing to send them to Catholic religion classes (offered at public schools) and to the First Communion.