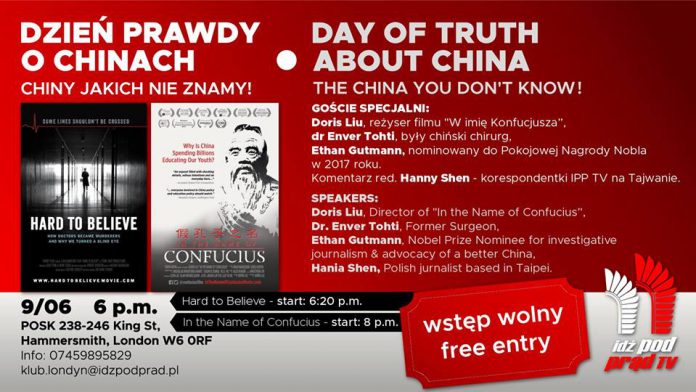 This is a double screening event followed by Q&A with China experts.
Starting with the breath-taking documentary “Hard to Believe”, we’ll explore the issue of forced organ harvesting from prisoners of conscience in China.

It will be followed by Q&A with investigative journalist & Nobel Prize Nominee Ethan Gutman, and former Chinese surgeon Enver Tohti.

Learn more about the film: hardtobelievemovie.com/

We’ll continue with “In the Name of Confucius”. It’s a new documentary film discussing the global controversies surrounding the Confucius Institutes, which have been accused of spreading Chinese propaganda in the West.

The film has won a number of international awards and saw highly successful screenings around te world.

Learn more about the film: inthenameofconfuciusmovie.com/

Doris Liu, Director of In the Name of Confucius;

“Hard to Believe” is a serious investigation into one of the most horrifying medical crimes of our time: forced live organ harvesting from tens of thousands of Chinese prisoners of conscience, and the response—or lack of it—around the world.

From an author’s 7-year investigation to a doctor’s confession; the determination of the son of a Holocaust survivor, to the persistence of a culturally-challenged victim community, “Hard To Believe” explores the mystery of why so few people seem to be paying attention to a crime so horrific it goes beyond belief.

Ethan Gutmann, an award-winning China analyst and human-rights investigator, is the author of Losing the New China (Encounter Books, 2004) and The Slaughter (Prometheus, 2014). A former foreign-policy analyst at the Brookings Institution, Gutmann has appeared on PBS, CNN, BBC, and CNBC. He was recently nominated for the 2017 Nobel Peace Prize.

Dr. Enver Tohti, Founder of the Uighur Cultural Association. Dr Tohti is a Uighur refugee and former surgeon at the Railway Central Hospital in Urumchi, China from 1985-1997. He is the first surgeon to admit to personally performing live organ harvesting in China. His story is featured in “Hard to Believe”.

More about “In the Name of Confucius”:

“In the Name of Confucius” is the first documentary exposé of the Chinese government’s multi-billion dollar Confucius Institute (CI), a Chinese language program now found in over 1,600 universities and schools world wide, and the growing global controversies surrounding it—loss of academic integrity, violations to human rights codes, foreign influence, and even potential infringements on national security.

BBC: Confucius institute: The hard side of China’s soft power

Learn more about the film: inthenameofconfuciusmovie.com

Doris Liu is an award-winning documentary filmmaker and journalist based in Toronto, Canada. As a Chinese immigrant, her passion is to tell compelling China stories that are rarely seen, yet essential for the world to understand its relationship with China. A former TV reporter, Doris won the award for the Best Multicultural TV Story for her insightful coverage of high-profile hate crimes against Asian anglers.