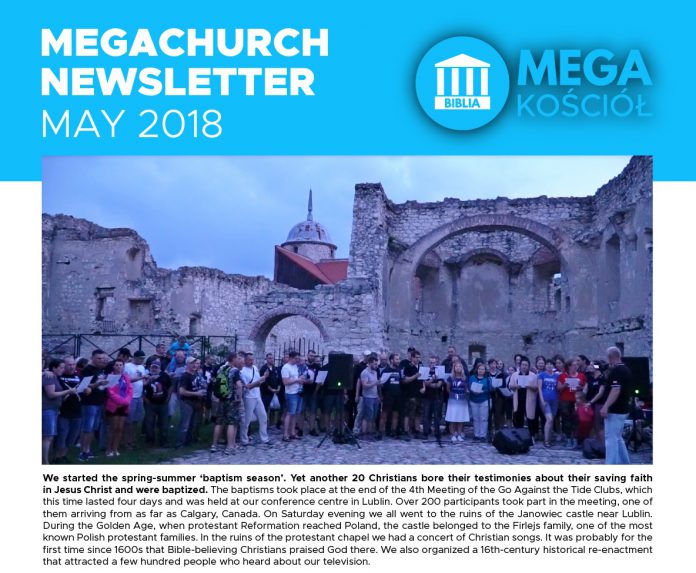 We started the spring-summer ‘baptism season’. Yet another 20 Christians bore their testimonies about their saving faith in Jesus Christ and were baptized. The baptisms took place at the end of the 4th Meeting of the Go Against the Tide Clubs, which this time lasted four days and was held at our conference centre in Lublin. Over 200 participants took part in the meeting, one of them arriving from as far as Calgary, Canada. On Saturday evening we all went to the ruins of the Janowiec castle near Lublin. During the Golden Age, when protestant Reformation reached Poland, the castle belonged to the Firlejs family, one of the most known Polish protestant families. In the ruins of the protestant chapel we had a concert of Christian songs. It was probably for the first time since 1600s that Bible-believing Christians praised God there. We also organized a 16th-century historical re-enactment that attracted a few hundred people who heard about our television.

At the beginning of May we organized another Christian Meeting whose aim was to sum up our monthly workshops to date. The main topic of the meeting was leadership and discipline in the church. Please pray for the leaders of our Bible groups in Poland and abroad.

May 13th marked the end of collecting signatures for a November 11 Movement’s petition to Donald Trump for an international investigation into the Smolensk catastrophe. We managed to collect 99,000 signatures so we fell short of the required 100,000. However, the very next day the American Observer published an in-depth article by Professor John Schindler, which actually repeated the text of our petition: http://observer.com/2018/05/evidence-shows-russia-had-role-in-smolensk-crash-killed-kaczynski/amp/?__twitter_impression=true

After that the Polish President mentioned the Smolensk case in the UN Security Council. We’ve got satisfaction then that we helped in demanding the truth about Smolensk again. Thank you for your help in collecting the signatures for the petition.

A British director of Polish origin made a thriller titled ‘The Last Witness’. It tells a story of a Russian who, knowing the truth about the murder of thousands of Polish POWs committed by Stalin and his agents, found it very difficult to show the truth to people living in the West. There are lots of similarities between the plot of the movie and the Smolensk catastrophe of 2010. The film might be watched on the VOD platform in the USA and the DVD is available at amazon.com. You really should watch the movie.

We made another Make Poland Great Again programme titled ‘Why do the Poles love America?’: https://youtu.be/gAdcTansmKk According to the newest survey Polish people have the most positive attitude to the USA among European countries.

We recorded DVDs with Professor Terry Mortenson’s lectures and his Christian testimony. Professor Mortenson represented the Answers in Genesis organization at the Creation Conference in Lublin.

We have the privilege to be distribute in Poland the movie ‘Genesis – Paradise Lost’. It’s proven to be very popular with our viewers and we’ve already had to order another batch of the DVDs.

Pastor Paweł Chojecki’s son gained a doctorate in maths. It’s the first Doctor that has been brought up in the Go Against the Tide circles!

– Along with the successes we’re experiencing all sorts of attacks on us such as lies spread on the Internet, attempts at setting us at variance with each other or even shattering our unity. Please pray for wisdom for us and so that we had deep insight into the difficult situations.