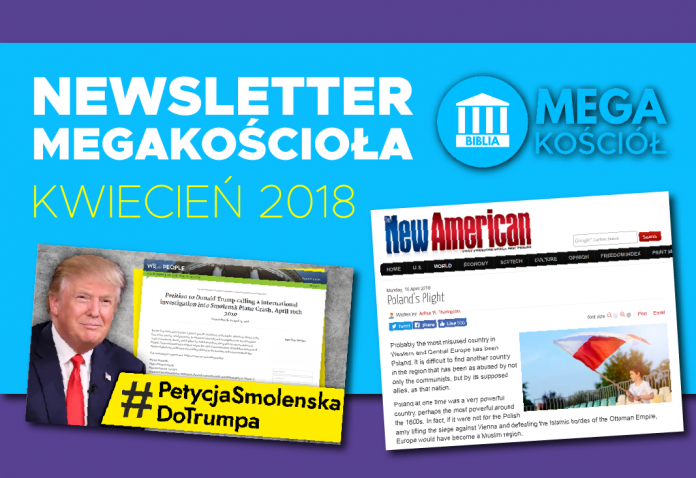 Spreading God’s truth over the Internet has brought fruit in the Unites States of America: a new Bible group has been started in Chicago. The city is jokingly said to be the second largest Polish city. We’re currently looking for a biblical American church that would like to cooperate in the mission to the Poles living in Chicago. Poles are one of the least evangelized ethnic groups in the USA which is the result of the dominance of catholicism and the traditional, though false, linking Polish patriotism with that religion.

Speaking politically, we started a petition to the US Government calling for an international investigation into the Smolensk plane crash on April 10 2010. We had to take action as the Polish government, whose fundamental policy is a compromise with Russian communists occupying Poland since 1944, practically gave up searching for truth in that matter. Hence our appeal for an international investigation into this crime. So far we’ve collected over 50,000 signatures but we’re dealing with numerous attacks. At the end of April the petition disappeared from the White House website and reappeared on the next day. We have the right to believe that the petition has been subject to hacking attacks as we’ve observed huge, reaching several thousand, changes in the numbers of the collected signatures and those happening within hours. As the petition was started in biblical circles (the November 11 Movement), its existence has been silenced by both state-owned and private media. You can find the text of the petition translated into several languages on our website: www.ruch11listopada.pl.

Please pray for the petition and send it to your friends: https://petitions.whitehouse.gov/petition/petition-donald-trump-calling-international-investigation-smolensk-plane-crash-april-10th-2010

There is only little time left – we need to collect 100,000 signatures before May 13 so that the petition could reach President Donald Trump. We keep praying on our TV channel publicly so that the case of the petition gave glory to Jesus. It has already divided Polish patriots into those who value God and those to whom the Roman Catholic organization matters most.

The CEO of the John Birch Society wrote another beautiful article about Poland and encouraged Americans to support Poles and sign the Smolensk petition:

Our second YouTube channel has been blocked and we can’t broadcast live on it. We’ve had to move to yet another channel: youtube.com/megachurch

Our team was the only one in the world to record the speech made by the Chinese pastor Bob Fu in the European Parliament. Pastor Bob Fu warned against communism and the violation of the free speech and freedom of religion in his country. There were reporters from Taiwan who only made a short report. Unfortunately, our team hadn’t been given accreditation which we perceive as a proof of discriminating us, this time on the European Union level. We managed to get into the premises of the Parliament in an emergency-like way: we were invited by the MP Bas Belder (the Reformed Political Party)

To our English-speaking viewers we recommend new programmes on the Make Poland Great Again channel:

– a chat with American vloggers on the threat coming from Russia (we differed substantially on the matter): https://youtu.be/m2_ut0lqh5M

– „What happened in Smolensk in 2010” – a Poles’ petition to President Donald Trump for an international investigation. The programme features a descendant of a Polish army officer murdered in Katyn: https://youtu.be/pL2CNiNGMXw

– Pray for the popularity of Professor Terry Mortenson’s lectures in Poland. We’ve managed to publish all of them on our channel.

– Pray for God’s blessing for our Bible groups in Poland and abroad.

– Pray for the wisdom we need to plan the future of our church in Lublin. We’re about to make a vital decision concerning the future venue for our church meetings.

– Pray for the Christian meeting during which we’re going to summarize our monthly workshops for the groups outside of Lublin.

– Pray for the annual meeting for the Go Against the Tide clubs. This time our special guest will be from the RSA and will tell us about the discrimination against whites and their extermination in that country.

– Pray for the safety of our pastor and the TV crew. Pastor’s car has been the aim of an attack again.