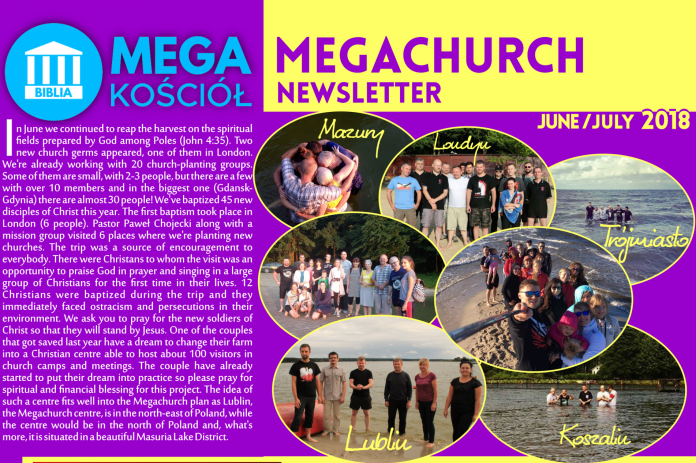 In June we continued to reap the harvest on the spiritual fields prepared by God among Poles (John 4:35). Two new church germs appeared, one of them in London. We’re already working with 20 church-planting groups. Some of them are small, with 2-3 people, but there are a few with over 10 members and in the biggest one (Gdansk-Gdynia) there are almost 30 people! We’ve baptized 45 new disciples of Christ this year. The first baptism took place in London (6 people). Pastor Paweł Chojecki along with a mission group visited 6 places where we’re planting new churches. The trip was a source of encouragement to everybody. There were Christans to whom the visit was an opportunity to praise God in prayer and singing in a large group of Christians for the first time in their lives. 12 Christians were baptized during the trip and they immediately faced ostracism and persecutions in their environment. We ask you to pray for the new soldiers of Christ so that they will stand by Jesus.

One of the couples that got saved last year have a dream to change their farm into a Christian centre able to host about 100 visitors in church camps and meetings. The couple have already started to put their dream into practice so please pray for spiritual and financial blessing for this project. The idea of such a centre fits well into the Megachurch plan as Lublin, the Megachurch centre, is in the north-east of Poland, while the centre would be in the north of Poland and, what’s more, it is situated in a beautiful Masuria Lake District.

The Go Against the Tide club in London organized a ‘Day of Truth About China’ with Enver Tohti, a Chinese surgeon, Ethan Gutmann, an English journalist nominated for the Nobel Peace Prize in 2017 and Doris Liu, the director of the „In the Name of Confucius’ documentary. Only this year our Go Against the Tide clubs have organized 15 such events in Poland and abroad. In June we organized the second ‘Day of Truth about China’ in Lublin with Hania Shen, a journalist living in Taiwan, as a guest. We had a live online meeting with Pastor Bob Kraft from Hong Kong who told us about the gradual communization of the formerly British colony.

Agnieszka from our church-planting group in Cracow directed the first creation theatre play in Poland: ’Following Creation’. The premiere took place during a theatre festiwal in Cracow. The play was inspired by the Creation Museum in Kentucky. Despite the obstruction caused by Catholics and atheists we managed to show the play twice. It was watched by about 300 people altogether.

Our TV club in Gdynia protested against the presence of the Communist China warship in a Polish port. Although only a few people took part in the picket, the event was reported by journalists of one of the main TV stations in Taiwan. Our action was also commented by Internet users in Taiwan, Hong Kong and China. They thanked Poles saying that we had showed understanding of communism and the threat it poses.

Here’s the clip summerizing the yearly Go Against the Tide clubs meeting (with English subtitles): https://youtu.be/8dfANlvWz5c

The renting period of our culture centre in which we’ve hosted even over 200 guests is ending, and we’re praying and looking for a new venue. This time we would like to buy a real estate. Please, pray so that God gave us wisdom and His blessing.