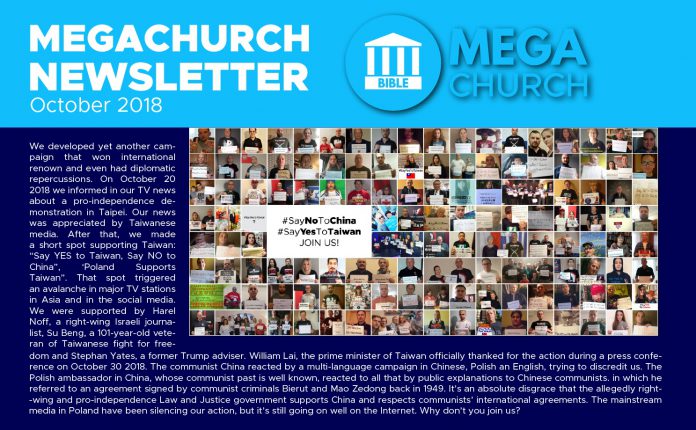 We developed yet another campaign that won international renown and even had diplomatic repercussions. On October 20 2018 we informed in our TV news about a pro-independence demonstration in Taipei. Our news was appreciated by Taiwanese media. After that, we made a short spot supporting Taiwan: “Say YES to Taiwan, Say NO to China”, ‘Poland Supports Taiwan”. That spot triggered an avalanche in major TV stations in Asia and in the social media. We were supported by Harel Noff, a right-wing Israeli journalist, Su Beng, a 101-year-old veteran of Taiwanese fight for freedom and Stephan Yates, a former Trump adviser. William Lai, the prime minister of Taiwan officially thanked for the action during a press conference on October 30 2018. The communist China reacted by a multi-language campaign in Chinese, Polish an English, trying to discredit us. The Polish ambassador in China, whose communist past is well known, reacted to all that by public explanations to Chinese communists. in which he referred to an agreement signed by communist criminals Bierut and Mao Zedong back in 1949. It’s an absolute disgrace that the allegedly right-wing and pro-independence Law and Justice government supports China and respects communists’ international agreements. The mainstream media in Poland have been silencing our action, but it’s still going on well on the Internet. Why don’t you join us?

Over 4.5 million viewers watched the “Clergy” movie, which shows the corruption of the Catholic Church clergy but does it without pointing to any solutions how to escape from the spiritual enslavement that Poland is in. We ran a few evangelizing actions: we spread the leaflets “Who do you follow, the clergy or the Bible?” and we hosted a discussion about the movie in our TV. Please pray for Poles so that they didn’t turn their backs to God in the face of the ongoing collapse of the Catholic Church and so that they could find their salvation in Jesus Christ. Pray also for new laborers in Poland!

At the end of our visit to the United States we were guests of honor at the 60th anniversary of setting up the John Birch Society, a conservative, anti-communist organization. Pastor Paweł Chojecki gave two lectures on the history of Poland, the modern fight against communism and the unprecedented success of the Go Against the Tide TV. Pastor had the privilege to open an official banquet with a prayer. The John Birch Society members and the CEO Arthur Thompson himself showed both a great interest in Poland a vast knowledge of our country. We were interviewed and had an opportunity to interview some interesting people. We talked about the restiges of communism in Poland and the persecutions of Christians on Polish universities. On our channel you can watch the interviews with leaders of the John Birch Society and the Freedom Project Academy as well as with the congressman Thomas Massie and Matthew Shea, a Washington House representative. While in Appleton, Wisconsin, we visited a few churches and got to know their pastors: Dr. Dennis Episcopo from the Appleton Alliance Church, Pastor Alvin Dupree from the Family First Ministries (our interview with the Pastor: https://youtu.be/1cbhfKanlpM) and Pastor Larry Creamer from the Valley Baptist Church.

During the last days of our visit we organized a screening of the “Katyń” movie in the Jackson Creek Fellowship near Chicago. We’d like to heartily thank Pastor Michael Shepherd for receiving Poles with great hospitality. About 60 people turned up at the screening, both Poles and Americans. Watch the video during which they talk about their impressions after the movie: https://youtu.be/iCNaR6rASB8 The Movie “Katyń. The Last Witness” is available at amazon.com

One of the fruits of the visit to the USA is a new program on our TV: “Time for the Polish Diaspora!” More and more new-born Poles are joining American churches. On October 28 three more Poles sympathizing with our TV were baptized in a church in Berlin, Connecticut. Please pray for new Bible groups on the East Coast where there are lots of Poles.

As we understand the significance of the congressional election in the USA for the case of freedom and for Christianity in the whole world, we made a clip “VOTE FOR REPUBLICANS”: https://youtu.be/D1vwd2cib18

As the outcome of our visit to the Liberty University, we posted a video with some excerpts from the lectures given by Pastor Paweł Chojecki and his daughter Kornelia about the spiritual situation in Poland: https://youtu.be/F8E7-wzAs4I Pray for more fruits of the visit. Poland needs university-trained spiritual leaders. So far, there isn’t a single Christian university in Poland nor a conservative Bible seminary.

On the November 11 there falls the 100th anniversary of Poland regaining independence, which happened in 1918 after 123-year-long period of the Partitions of Poland. The United States helped us greatly then. Unfortunately, the current political Polish authorities are leading us towards the submission to Germany in the EU and the communists of Russia and China representing the New Silk Road. Pray for a change of direction in this treacherous policy, so that Poland could be again on the side of the free world.