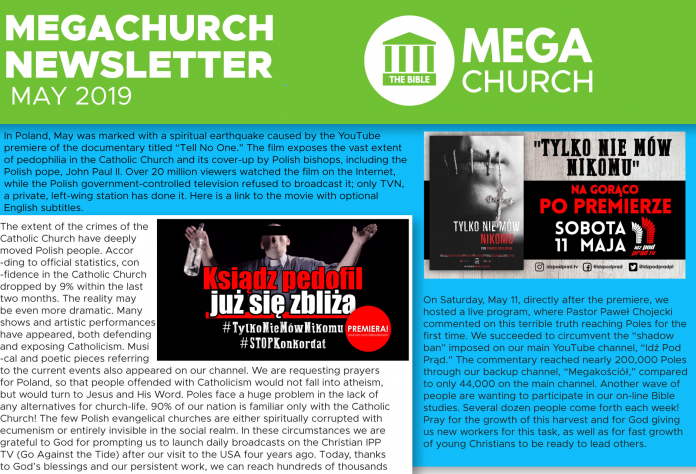 In Poland, May was marked with a spiritual earthquake caused by the YouTube premiere of the documentary titled “Tell No One.” The film exposes the vast extent of pedophilia in the Catholic Church and its cover-up by Polish bishops, including the Polish pope, John Paul II. Over 20 million viewers watched the film on the Internet, while the Polish government-controlled television refused to broadcast it; only TVN, a private, left-wing station has done it. Here is a link to the movie with optional English subtitles.

On Saturday, May 11, directly after the premiere, we hosted a live program, where Pastor Paweł Chojecki commented on this terrible truth reaching Poles for the first time. We succeeded to circumvent the “shadow ban” imposed on our main YouTube channel, “Idź Pod Prąd.” The commentary reached nearly 200,000 Poles through our backup channel, “Megakościół,” compared to only 44,000 on the main channel. Another wave of people are wanting to participate in our on-line Bible studies. Several dozen people come forth each week! Pray for the growth of this harvest and for God giving us new workers for this task, as well as for fast growth of young Christians to be ready to lead others.

The extent of the crimes of the Catholic Church have deeply moved Polish people. According to official statistics, confidence in the Catholic Church dropped by 9% within the last two months. The reality may be even more dramatic. Many shows and artistic performances have appeared, both defending and exposing Catholicism. Musical and poetic pieces referring to the current events also appeared on our channel. We are requesting prayers for Poland, so that people offended with Catholicism would not fall into atheism, but would turn to Jesus and His Word. Poles face a huge problem in the lack of any alternatives for church-life. 90% of our nation is familiar only with the Catholic Church! The few Polish evangelical churches are either spiritually corrupted with ecumenism or entirely invisible in the social realm. In these circumstances we are grateful to God for prompting us to launch daily broadcasts on the Christian IPP TV (Go Against the Tide) after our visit to the USA four years ago. Today, thanks to God’s blessings and our persistent work, we can reach hundreds of thousands of Poles, and basically the entire Polish socio-political elite is aware of our existence. In connection with the uproar over the depravity and crime within the Catholic Church we initiated a campaign in social media, #STOPKonkordat. Shortly after, this issue was addressed by the leading Catholic hierarchs, such as, former nuncio, Archbishop Kowalczyk and secretary to John Paul II, Archbishop Cardinal Dziwisz.

Thanks to the concordat the Catholic Church in Poland enjoys a privileged political and economic position. For example, it receives enormous subsidies from the state budget.

In the beginning of May, we had the last Christian rally in this academic year. We finished the first and the second level of training Christians for service in the Megachurch for Poland project. 120 people attended. During the rally, the first baptisms this year took place. Seven people acknowledged their relationship with Jesus.

In order to support the citizens of Hong Kong in their pursuit for freedom we arranged a flash mob in the main square of our city of Lublin. See the video. Media in Hong Kong reported on this action.

We are glad that God allows for the development of our film team. This month, in addition to a few shorter productions we put together a 10-minute-long animation, “Apocalypse Is Not a Fiction!”.

Members of our Chicago Chapter of the Go Against the Tide TV participated in a parade commemorating the Constitution of May 3. See the video.

By permission from Liberty University, we translated portions of the speech by the vice-president of the United States, Mike Pence, given during the graduation ceremony at LU. It was a big surprise and induced longing in our viewers, who have never seen a politician of such a rank in Poland openly giving testimony of his conversion to Jesus Christ and the influence of Christians on the nation’s fate.

Also in May, the record in the number of viewers supporting us financially was broken: 1119 people! Praise the Lord!

On the last day of May, Twitter accounts of Pastor Paweł Chojecki and our correspondent from Taiwan, Hanna Shen, were blocked. Most likely it is in connection with the communists’ effort to cover up the truth about the Tian’anmen Square massacre on the eve of the 30th anniversary of this communist crime this June 4.