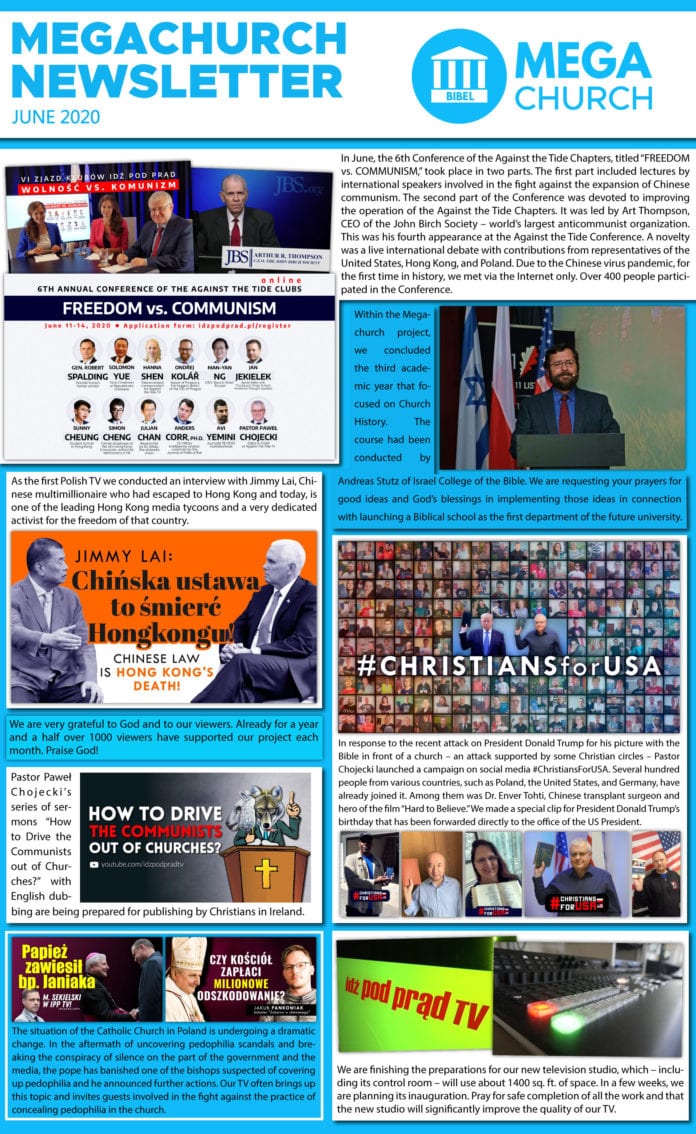 In June, the 6th Conference of the Against the Tide Chapters, titled “FREEDOM vs. COMMUNISM,” took place in two parts.

The first part included lectures by international speakers involved in the fight against the expansion of Chinese communism. Our Conference was attended by:

Also, we have received messages to the participants of the Conference from Eric Hovind of Creation Today and Bob Kraft, American pastor involved in the fight for freedom of Hong Kong.

The second part of the Conference was devoted to improving the operation of the Against the Tide Chapters. It was led by Art Thompson, CEO of the John Birch Society – world’s largest anticommunist organization. This was his fourth appearance at the Against the Tide Conference. A novelty was a live international debate with contributions from representatives of the United States, Hong Kong, and Poland.

Due to the Chinese virus pandemic, for the first time in history, we met via the Internet only. Over 400 people participated in the Conference.

In response to the recent attack on President Donald Trump for his picture with the Bible in front of a church – an attack supported by some Christian circles – Pastor Chojecki launched a campaign on social media #ChristiansForUSA.

Several hundred people from various countries, such as Poland, the United States, and Germany, have already joined it. Among them was Dr. Enver Tohti, Chinese transplant surgeon and hero of the film “Hard to Believe.” We made a special clip for President Donald Trump’s birthday that has been forwarded directly to the office of the US President.

As the first Polish TV we conducted an interview with Jimmy Lai, Chinese multimillionaire who had escaped to Hong Kong and today, is one of the leading Hong Kong media tycoons and a very dedicated activist for the freedom of that country.

In the conversation with Against the Tide TV he said:

“What have we got if we don’t have the protection of the rule of law and freedom? We are not animals. We have values, we have spirits. We need freedom to live.”

Pastor Paweł Chojecki’s series of sermons “How to Drive the Communists out of Churches?” with English dubbing are being prepared for publishing by Christians in Ireland.

The situation of the Catholic Church in Poland is undergoing a dramatic change. In the aftermath of uncovering pedophilia scandals and breaking the conspiracy of silence on the part of the government and the media, the pope has banished one of the bishops suspected of covering up pedophilia and he announced further actions. In order to reach the pope, the Poles posted a paid advertisement in the Roman newspaper “La Repubblica.” Our TV often brings up this topic and invites guests involved in the fight against the practice of concealing pedophilia in the church.

Within the Megachurch project, we concluded the third academic year that focused on Church History. The course had been conducted by Andreas Stutz of Israel College of the Bible. We are requesting your prayers for good ideas and God’s blessings in implementing those ideas in connection with launching a Biblical school as the first department of the future university.

We are finishing the preparations for our new television studio, which – including its control room – will use about 1400 sq. ft. of space. In a few weeks, we are planning its inauguration. Pray for safe completion of all the work and that the new studio will significantly improve the quality of our TV.

We are very grateful to God and to our viewers. Already for a year and a half over 1000 viewers have supported our project each month. Praise God!