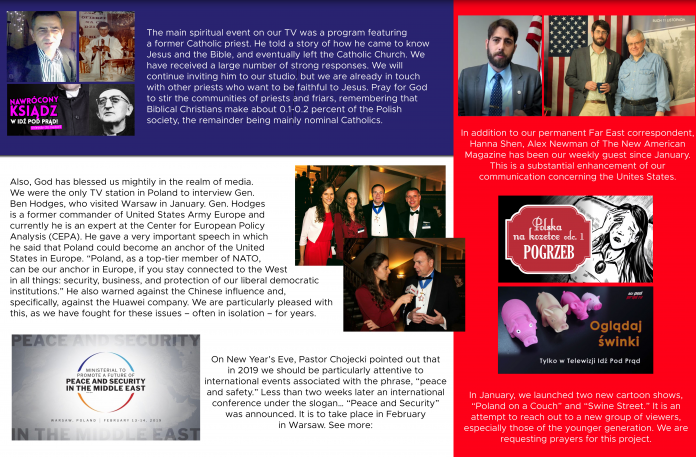 The main spiritual event on our TV was a program featuring a former Catholic priest. He told a story of how he came to know Jesus and the Bible, and eventually left the Catholic Church. We have received a large number of strong responses. We will continue inviting him to our studio, but we are already in touch with other priests who want to be faithful to Jesus. Pray for God to stir the communities of priests and friars, remembering that Biblical Christians make about 0.1-0.2 percent of the Polish society, the remainder being mainly nominal Catholics.

Also, God has blessed us mightily in the realm of media. We were the only TV station in Poland to interview Gen. Ben Hodges, who visited Warsaw in January. Gen. Hodges is a former commander of United States Army Europe and currently he is an expert at the Center for European Policy Analysis (CEPA). He gave a very important speech in which he said that Poland could become an anchor of the United States in Europe. “Poland, as a top-tier member of NATO, can be our anchor in Europe, if you stay connected to the West in all things: security, business, and protection of our liberal democratic institutions.” He also warned against the Chinese influence and, specifically, against the Huawei company. We are particularly pleased with this, as we have fought for these issues – often in isolation – for years. SEE VIDEO: https://youtu.be/UJSdBEHCn0s

In addition to our permanent Far East correspondent, Hanna Shen, Alex Newman of The New American Magazine has been our weekly guest since January. This is a substantial enhancement of our communication concerning the Unites States.

In January, we launched two new cartoon shows, “Poland on a Couch” and “Swine Street.” It is an attempt to reach out to a new group of viewers, especially those of the younger generation. We are requesting prayers for this project.

On New Year’s Eve, Pastor Chojecki pointed out that in 2019 we should be particularly attentive to international events associated with the phrase, “peace and safety.” Less than two weeks later an international conference under the slogan… “Peace and Security” was announced. It is to take place in February in Warsaw. See more (with English subtitles): https://youtu.be/-qp_8I3KAUY

Our publishing house has issued another book, “The Judges of Thoughts: Acts of the Inquisition,” by Piotr Setkowicz. It is a comprehensive account of the methods used by the Roman Catholic Church throughout history to deny people access to the Bible and independent thinking. This is a unique book on the Polish market. We have had either Communist exaggerated descriptions of the crimes of the Inquisition or Catholic hagiographies whitewashing it. Poles will now have an opportunity to analyze factual information without bias.

An interview with John Gorecki, an American of Polish descent appeared on our channel. He tells a moving story about meeting our team in the Chicago area last fall, “Thanks to you I felt connected to my Polish heritage.”: https://youtu.be/B1IeX6-IYCQ
Also, we encourage you to devote twenty plus minutes to browse what God blessed us with in 2018 (English version movie): https://youtu.be/WwYa5vwkW6U

– We are requesting a prayer for God to thwart the plans of the enemies of Poland, who attempt to distort building good American-Polish relations.
– For the apostasy of Pope Francis involving fraternizing with Islam and with Chinese communists to result in pushing many Poles towards independent Bible reading and faith in Jesus.