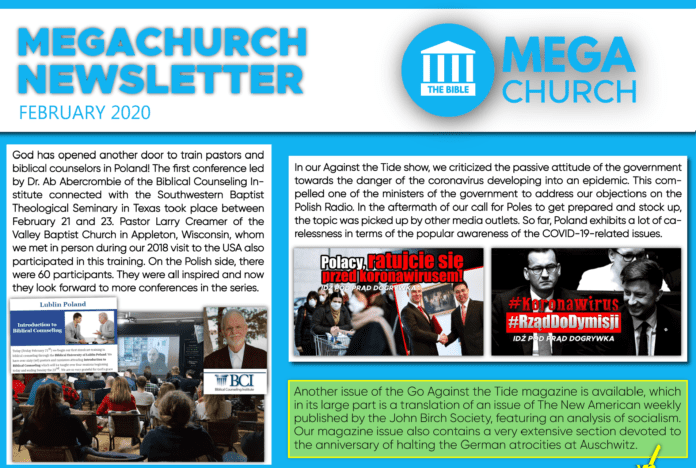 God has opened another door to train pastors and biblical counselors in Poland! The first conference led by Dr. Ab Abercrombie of the Biblical Counseling Institute connected with the Southwestern Baptist Theological Seminary in Texas took place between February 21 and 23.

Pastor Larry Creamer of the Valley Baptist Church in Appleton, Wisconsin, whom we met in person during our 2018 visit to the USA also participated in this training. On the Polish side, there were 60 participants. They were all inspired and now they look forward to more conferences in the series.

Ryan Helfenbein, Executive Director of the Falkirk Center for Faith & Liberty and the Vice President of Communications and Public Engagement at Liberty University, the largest Christian university in the world, appeared on our TV! Watch the video in English:

In our Against the Tide show, we criticized the passive attitude of the government towards the danger of the coronavirus developing into an epidemic. This compelled one of the ministers of the government to address our objections on the Polish Radio. In the aftermath of our call for Poles to get prepared and stock up, the topic was picked up by other media outlets. So far, Poland exhibits a lot of carelessness in terms of the popular awareness of the COVID-19-related issues.

Abby Johnson, the main character in the film “Unplanned,” visited Poland. Our club members in a number of cities were able to meet with her. At the same time, we had an interview with Ashley Bratcher, the actress who played Abby Johnson.

We launched the campaign #PolesForTrump2020 to show the Poles’ support for President Donald Trump in the 2020 election. Our delegation reached Chicago, where a screening of the film “Genesis: Paradise Lost” with Polish dubbing is planned for March 7. We request prayers that many people seeking God will come and that this event will stimulate a development of a Bible group in the city that is the largest center for the Polish Diaspora in the world.

Another issue of the Go Against the Tide magazine is available, which in its large part is a translation of an issue of The New American weekly published by the John Birch Society, featuring an analysis of socialism. Our magazine issue also contains a very extensive section devoted to the anniversary of halting the German atrocities at Auschwitz.

We received acknowledgements from the president of Taiwan, Tsai Weng, for the support by foreign friends, such as Pastor Paweł Chojecki and the Against the Tide TV. Over a year ago we publicized the campaign #SayYesToTaiwan, which received a lot of attention particularly in Taiwan.

We had an interview with Ariel Hyde of the Tree of Life ministry, an organization of Messianic Jews in Israel. The conversation mainly focused on the construction of the Third Temple. A street survey they conducted has been translated to Polish and viewed on our channel by over 150,000 people.

We produced another music video titled “Noah’s Ark”. It is a poetic piece by a Polish artist, which alludes to the flood and its analogies in the present times.

We were able to have an interview with Guus Berkhout, president of Climate Intelligence Foundation, an organization that recently has issued a letter to the Secretary-General of the UN, António Guterres, and signed by over 800 scientists, which says that there is no global warming.

We have postponed the move to our new location until March. We are very encouraged by people from Poland and abroad, who come to help us. Not all of them are members of our Bible groups; some belong to other churches.

• For Poles to recognize the need of God’s care and help in the wake of the coronavirus epidemic. Our nation is dominated by a materialistic attitude and a tendency to rely on oneself or the government.
• For our church’s missionary teams in Great Britain, the United States, and Israel to complete their missions successfully and come back home.
• For development of new programs on our TV.
• For Christians from other churches in Poland to support our media and education project in a more unwavering way.