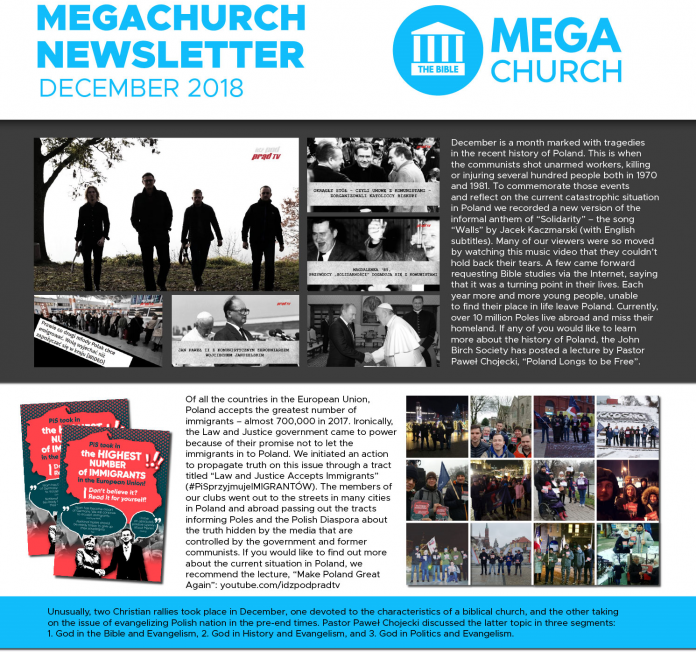 December is a month marked with tragedies in the recent history of Poland. This is when the communists shot unarmed workers, killing or injuring several hundred people both in 1970 and 1981. To commemorate those events and reflect on the current catastrophic situation in Poland we recorded a new version of the informal anthem of “Solidarity” – the song “Walls” by Jacek Kaczmarski (with English subtitles): https://youtu.be/Od-4aL5Vd20
Many of our viewers were so moved by watching this music video that they couldn’t hold back their tears. A few came forward requesting Bible studies via the Internet, saying that it was a turning point in their lives. Each year more and more young people, unable to find their place in life leave Poland. Currently, over 10 million Poles live abroad and miss their homeland. If any of you would like to learn more about the history of Poland, the John Birch Society has posted a lecture by Pastor Paweł Chojecki, “Poland Longs to be Free”: https://youtu.be/c8GIQ3YpCZ4

Of all the countries in the European Union, Poland accepts the greatest number of immigrants – almost 700,000 in 2017. Ironically, the Law and Justice government came to power because of their promise not to let the immigrants in to Poland. We initiated an action to propagate truth on this issue through a tract titled “Law and Justice Accepts Immigrants” (#PiSprzyjmujeIMIGRANTÓW). The members of our clubs went out to the streets in many cities in Poland and abroad passing out the tracts informing Poles and the Polish Diaspora about the truth hidden by the media that are controlled by the government and former communists. If you would like to find out more about the current situation in Poland, we recommend the lecture, “Make Poland Great Again”: https://youtu.be/BXWxj2csVrg

Unusually, two Christian rallies took place in December, one devoted to the characteristics of a biblical church, and the other taking on the issue of evangelizing Polish nation in the pre-end times. Pastor Paweł Chojecki discussed the latter topic in three segments: 1. God in the Bible and Evangelism, 2. God in History and Evangelism, and 3. God in Politics and Evangelism.

Alex Newman, an American journalist, was our guest on Thanksgiving Day and during an American Night. He reminded us about the biblical roots of America and her pioneers:
https://youtu.be/wFl9bSY5sKQ

Bluesman Jaromi joined the ranks of Christian artists by confessing his faith in Jesus through the song, “Jesus, Rescue Me!” He performed it during a concert at our church: https://youtu.be/_3MAsFPwhUY

Jointly with the John Birch Society we sent a journalist team to the United Nations Climate Change Conference in Katowice. Capturing the attack of leftist youth on the American delegation was particularly important. Also, our correspondent was a guest at an American Christian radio station, FreedomizerRadio: https://idzpodprad.pl/aktualnosci/amerykanskie-radio-o-idz-pod-prad-i-kosciele-pastora-chojeckiego/

Alex Newman gave a lecture at our church titled “What Christians Should Know about the Globalist Conspiracy”? https://youtu.be/gIKTLi6ZbR8

Polish professor of geology associated with the MegaChurch project, Dr. Marian Gorol, gave an interview to Alex Newman on the myth of global warming and harmful effects of CO2 (a dual-language interview in English and Polish: https://youtu.be/FJXqLHtf4SY)

A full version of the first sermon in the series on communism, “How to Drive the Communists out of Churches”, by Pastor Paweł Chojecki is available in English.
https://youtu.be/DWLETgS4wK8
An interview with Terry Falwell, a relative of Pastor Jerry Falwell the founder of Liberty University, the largest Christian university in the world, is available too:
https://youtu.be/7M8mNCo_PlI

In December, we hosted a fundraiser to support the best Polish javelin thrower, Marcelina Witek, who often represents our Go Against the Tide TV in the media. Another world champion, Małgorzata Zabrocka, moved many of us by giving the last medal in her sports career, a gold won at the European Traditional Karate Championship in 2017, to an auction benefitting Marcelina Witek. Thanks to that, we were able to collect about 25,000 PLN for our Sports Fund in the single month of December.

Prayer requests:
– For wisdom and blessing of our Bible group leaders to be able to lay solid foundations for the growth of the future daughter-churches.
– For the impact of the screening of the movie, “Genesis”, organized by our church in Poland and abroad.
– 2019 is an election year in Poland. We are asking for prayers for wisdom of the Poles, especially our community that they take full advantage of this occasion.
– For positive changes in the organization of our TV, resulting in the expansion of our service in 2019. (We have new talents and many ideas that should be rightly implemented.)