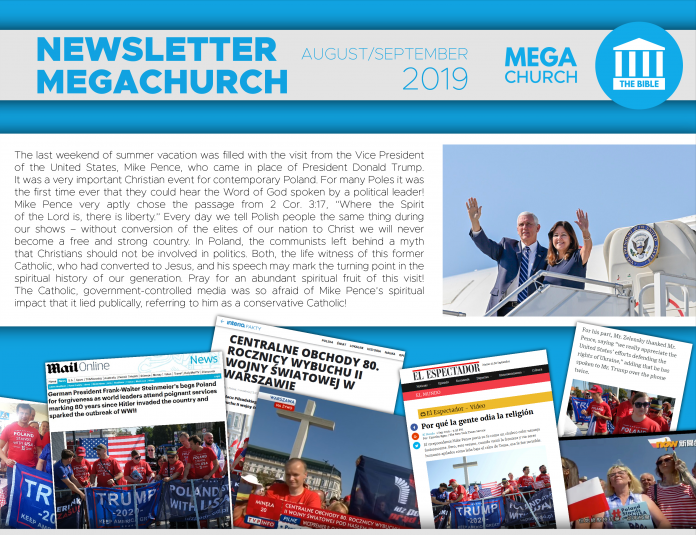 The last weekend of summer vacation was filled with the visit from the Vice President of the United States, Mike Pence, who came in place of President Donald Trump. It was a very important Christian event for contemporary Poland. For many Poles it was the first time ever that they could hear the Word of God spoken by a political leader! Mike Pence very aptly chose the passage from 2 Cor. 3:17, “Where the Spirit of the Lord is, there is liberty.” Every day we tell Polish people the same thing during our shows – without conversion of the elites of our nation to Christ we will never become a free and strong country. In Poland, the communists left behind a myth that Christians should not be involved in politics. Both, the life witness of this former Catholic, who had converted to Jesus, and his speech may mark the turning point in the spiritual history of our generation. Pray for an abundant spiritual fruit of this visit! The Catholic, government-controlled media was so afraid of Mike Pence’s spiritual impact that it lied publically, referring to him as a conservative Catholic!

Our church members and the TV team were the only organized group welcoming the Vice President of the United States. Unfortunately, this shows ever growing effectiveness of the Russian-German and Vatican propaganda aimed at discouraging Poles from a partnership-based alliance with the Unites States of America, in favor of surrendering independence in order to build federal European Union. In practice, this means eradication of nation states. Pray for Poles that they would open their eyes.

Photos showing our group have been published around the world. Vice President Pence and his wife honored our representatives, as they nearly stopped their limo and waved to our club members holding banners saying, #Trump2020 and #PolandStandsWithUSA.

We also prepared a pamphlet titled, #PolandStandsWithUSA, in Polish and English. We are asking you to circulate it among your contacts. https://againstthetide.tv/2019/08/28/why-should-poland-and-the-usa-stand-together-leaflet-for-printing/

August started for us with a wonderful experience of communion within a large group of Christians during a camp for the participants in the Megachurch project. Nearly 200 Christians from our Bible groups from Poland and other countries, even from the US and Canada, came for a week to a beautiful spot in Poland! We were immersed in adoring God, in His Word (we studied the Epistle to the Hebrews), and in the joy of being together in unity (Ps. 133). During the camp, one of the Polish couples living in Great Britain got married, and about 50 born-again people were baptized. We were also delighted to raise the level of autonomy of the first of our Bible groups to the rank of a daughter-church. It is not yet a fully independent church, still being under supervision of our elders, but it has its own clearly designated leadership and functions. The camp took place at our newly prepared summer resort featuring a meeting hall for approximately 200 people. The facility was built within three months thanks to the conscientious effort of Christian workers and the abundant material support of our entire community.

We published Pastor Paweł Chojecki’s book, “Difficult Verses,” in which he analyzes the majority of verses used by people who dispute the eternal security of believers, and the most conspicuous heresies of Catholicism. The Pastor’s intension was that the profit from selling this book would become the founding fund for the University. During the same month, other donors added 110,000 PLN to the fund! This motivated us to make a decision to initiate specific actions in implementing the University project. Pray for the selection of appropriate real estate we intend to purchase and for foreign partners in this project. This year, we are launching a pilot college-level course in the history of the early Church, from the apostolic times to Emperor Constantine. It will be taught by Andreas Stutz, a PhD candidate at the Master’s University in California and a lecturer at Israel College of the Bible.
We are requesting your prayers for this project to be blessed, so that it transitions into a Bible school first, and then into a university!

Our video-clip, #FreeHongKong, has become very popular; it has been viewed nearly 200,000 times. In their comments, thousands of citizens of Hong Kong thanked us for our support. As the Go Against the Tide community, we joined the international campaign, #Eye4HK, as a measure of solidarity with the paramedic, who was shot in her eye by a policeman and lost her sight.

We have translated new material promoting Polish Heroes of the West. The previous was about King Jan III Sobieski. This time it is about Maria Curie-Skłodowska. She was the first woman, who received the Noble Prize and was also the first person, who was awarded two such prizes. We would like to thank the Americans from Freedom Project Academy for making this video available to us!

We are pleased with the young generation of teenagers (ages 13-17) eager to work at our newsroom. The highlight of their vacation apprenticeship was the August film workshops that resulted in production of our first movies.