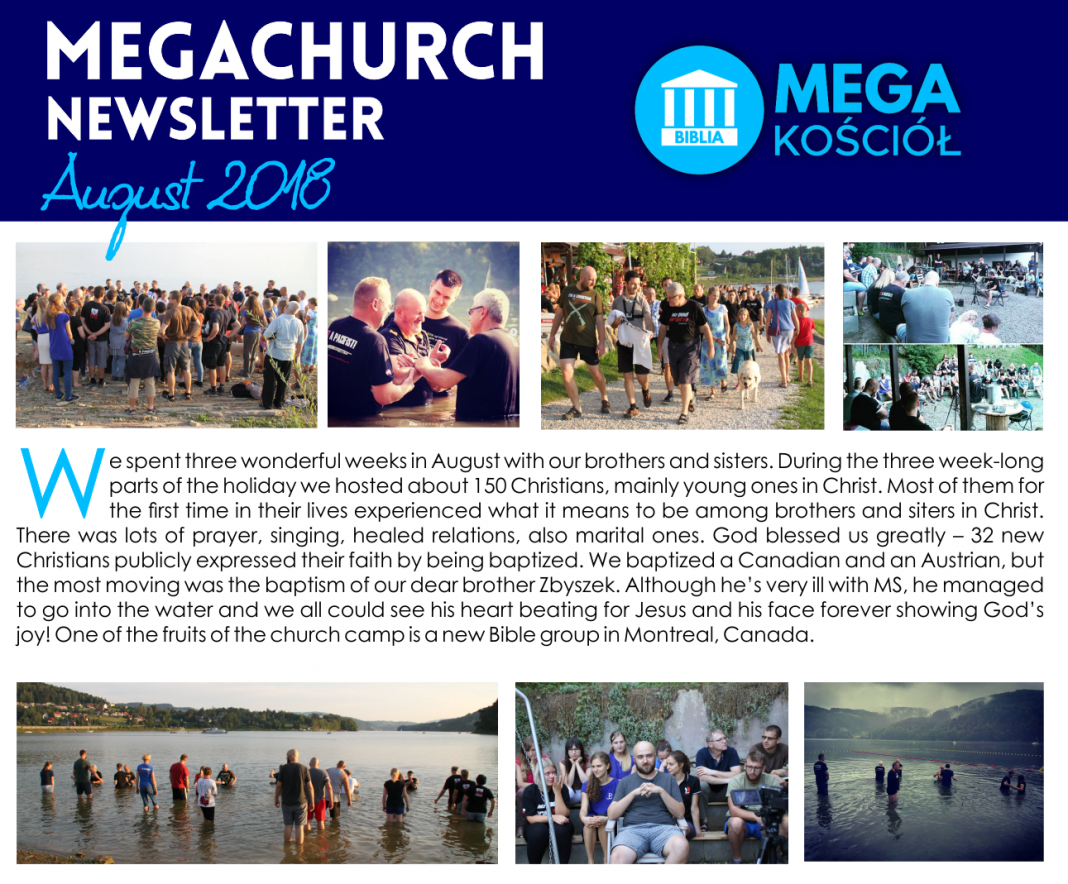 We spent three wonderful weeks in August with our brothers and sisters. During the three week-long parts of the holiday we hosted about 150 Christians, mainly young ones in Christ. Most of them for the first time in their lives experienced what it means to be among brothers and sisters in Christ. There was lots of prayer, singing, healed relations, also marital ones. God blessed us greatly – 32 new Christians publicly expressed their faith by being baptized. We baptized a Canadian and an Austrian, but the most moving was the baptism of our dear brother Zbyszek. Although he’s very ill with MS, he managed to go into the water and we all could see his heart beating for Jesus and his face forever showing God’s joy! One of the fruits of the church camp is a new Bible group in Montreal, Canada.

On the last day of our stay in the mountains we got the news that our political commentator Marian Kowalski left our TV after many years of cooperation. He did it without any explanation and soon began to slander us as a sect. His slander was willingly picked up by the mainstream and government media which began a smear campaign against our church and TV channel. However, this all resulted in a new record of live viewers during Pastor Paweł Chojecki’s Sunday sermon – about 1,000 viewers. Our daily programmes have also gained in popularity. Devil’s plans were thwarted once again!

At the end of September we’re going to the States in a large group. We hope we’ll take a spiritual harvest among almost 1,000,000 Poles living in Chicago and we’ll strengthen our Chicago Bible group. We also hope to establish contacts that will help us in setting up a Christian University in Poland. We’re planning to visit the states of Illinois, Kentucky, Virginia and Wisconsin.

– Pray for the spiritual fruit of our journey, so that God put the right people on our way and so that we could be good witnesses of Christ and came home safe and sound.

– Our chief creationist Małgorzata Gazda will take her PhD exam at the end of September. The doctorate is based on Stephen Meyer’s book ‘Signature in the Cell.’ Please pray for her!

-We’ve put off the decision concerning buying a real estate till next month. Pray for the wisdom for us and for God’s financial provision.

-Pray for our TV channel viewers who after Marian Kowalski left us need to distinguish between right and wrong.

-In spite of the diversities new believers from all over the world contact us every day asking for spiritual care. Pray for the strength for us and for new workers. AGAINST THE TIDE TV NEWSLETTER – JUNE 2022

AGAINST THE TIDE TV NEWSLETTER – MAY 2022