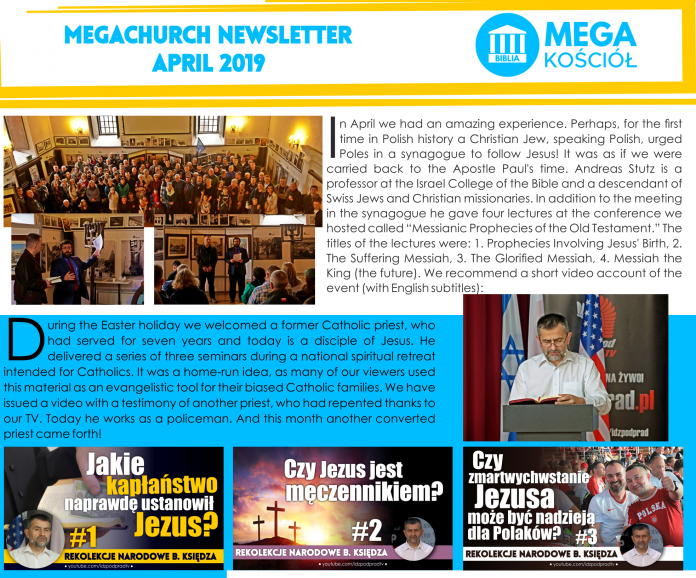 In April we had an amazing experience. Perhaps, for the first time in Polish history a Christian Jew, speaking Polish, urged Poles in a synagogue to follow Jesus! It was as if we were carried back to the Apostle Paul’s time. Andreas Stutz is a professor at the Israel College of the Bible and a descendant of Swiss Jews and Christian missionaries. In addition to the meeting in the synagogue he gave four lectures at the conference we hosted called “Messianic Prophecies of the Old Testament.” The titles of the lectures were: 1. Prophecies Involving Jesus’ Birth, 2. The Suffering Messiah, 3. The Glorified Messiah, 4. Messiah the King (the future). We recommend a short video account of the event (with English subtitles).

During the Easter holiday we welcomed a former Catholic priest, who had served for seven years and today is a disciple of Jesus. He delivered a series of three seminars during a national spiritual retreat intended for Catholics. It was a home-run idea, as many of our viewers used this material as an evangelistic tool for their biased Catholic families. We have issued a video with a testimony of another priest, who had repented thanks to our TV. Today he works as a policeman. And this month another converted priest came forth

Virtually every day God gives us new converts, who are asking for pastoral care. Because of this, we have to reorganize our services so that they are more effective. We would like to involve the younger Christians in caring for the youngest ones. Also, we pray for new workers to help in this great harvest

We rented a couple more billboards for the poster titled “The Catholic Church Has Betrayed Jesus!” It is available in English as well. We have issued another tract, “The Apocalypse is not a Fiction!” in the amount of 30,000 copies. It is attracting keen interest among Poles, especially in the light of the recent terrorist attacks against Christians, as well as the actions of the Vatican in accord with the globalists, who plan to do away with national states within the European Union

Another sermon talking about communism in churches called “State Idolatry,” by Pastor Paweł Chojecki is available with English subtitles

The communist deception has also reached the Polish churches. The Baptist Union of Poland (the Baptist Christian Church in the Republic of Poland), dominating among the Baptists, organized a debate called “Geopolitics and Christianity.” It was attended by Pastor Dr. Mateusz Wichary (the head of the Baptist church) and an atheist lobbyist for China, Dr. Jacek Bartosiak. During the event they advertised the Chinese communist Silk Road and criticized the United States. This was the first such spectacular manifestation of communist political propaganda within the Polish Protestant churches. Up to this point those churches typically shunned politics in accordance with their communist heritage. Evidently, the trend is changing, and now communism will be proclaimed in the Polish Protestant churches. In the Catholic Church in Poland it has been preached for a long time – since 1950, when Polish bishops signed an agreement with the communists. More on this issue in the article, “Wichary’s Communist Propaganda in the Baptist Church!”.

In response to the imprisonment of 75-year-old retired pastor, Chu Yiu-ming, for his participation in the peace protest in Hong Kong in 2014, we have initiated the action #FreeHongKong. We were the only TV station in Poland to report live from Hong Kong, having Pastor Bob Kraft on the air.

We have announced our plan to establish a private Christian high school to open in September of this year. An interest in the alternatives to the state-controlled, leftist schools is on the rise in Poland, especially after the April teachers’ strike. God is wonderfully leading us and blessing our plans! We are requesting your prayers for our continued persistence in carrying out this project.

For another month in a row, God has blessed us financially in the form of over 1000 donors and close to 100,000 PLN in proceeds for maintaining our various services. Praise the Lord!