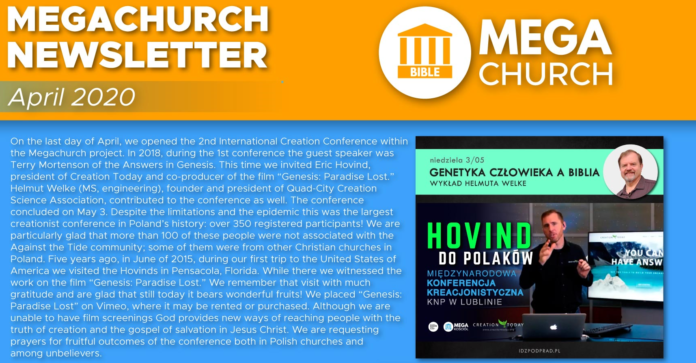 On the last day of April, we opened the 2nd International Creation Conference within the Megachurch project. In 2018, during the 1st conference the guest speaker was Terry Mortenson of the Answers in Genesis. This time we invited Eric Hovind, president of Creation Today and co-producer of the film “Genesis: Paradise Lost.” Helmut Welke (MS, engineering), founder and president of Quad-City Creation Science Association, contributed to the conference as well. The conference concluded on May 3. Despite the limitations and the epidemic this was the largest creationist conference in Poland’s history: over 350 registered participants! We are particularly glad that more than 100 of these people were not associated with the Against the Tide community; some of them were from other Christian churches in Poland. Five years ago, in June of 2015, during our first trip to the United States of America we visited the Hovinds in Pensacola, Florida. While there we witnessed the work on the film “Genesis: Paradise Lost.” We remember that visit with much gratitude and are glad that still today it bears wonderful fruits! We placed “Genesis: Paradise Lost” on Vimeo, where it may be rented or purchased. Although we are unable to have film screenings God provides new ways of reaching people with the truth of creation and the gospel of salvation in Jesus Christ. We are requesting prayers for fruitful outcomes of the conference both in Polish churches and among unbelievers.

Our petition to President Donald Trump to hold China’s government accountable for the coronavirus achieved a great success; we had collected 100,000 signatures one week before the deadline! Politicians, journalists, and lawyers from the USA, Japan, India, Taiwan, and Hong Kong commented on it. We are pleased with the fact that Donald Trump has changed his narrative and now he is firmly accusing China of infecting the world with the coronavirus and calling for reparations. Praise Jesus!

We have additional translations of the tract “Coronavirus: And Now What?” It is available at megachurch.pl  in English, French, Spanish, Dutch, German, Russian, Swedish, Italian, and Hebrew! Also, this month we published animations to the tract in Russian and Hebrew. In all, almost 600,000 people have viewed it in Polish!

In April, we experienced a revival in our relations with media outlets and politicians from Czechia. It had to do with the murder of Jaroslav Kubera, head of the Czech senate. Suspicions are directed at Chinese communists and their Russian accomplices. Another assassin arrived in Prague with intention to murder the city’s mayor, Zdeněk Hřib, and the head of one of Prague’s districts, Ondřej Kolář. Both politicians boldly resist Chinese communism and the remnants of Russia’s influence in Czechia. They have been put under police protection. Ondřej Kolář and Tomáš Zdechovský, a Czech member of the European Parliament, gave interviews to our television. Pray for a spiritual harvest and Polish-Czech church cooperation resulting from these contacts.

Our illustrator, Greta Samuel, started receiving threats and curses coming from Chinese accounts at behance.net as comments under her artwork “Made in China. No thanks,” an illustration to an Internet campaign #NieKupujęChińskiego (I don’t buy “Made in China”).

The Against the Tide TV community was the first to thank the Taiwanese nation and government for their help in the form of donating protective equipment against the CCP virus. This fact has been noticed in Taiwan by the office of the President of Taiwan, Tsai Ing-wen. It is a shame for Poles that the Polish government still recognizes Taipei as part of communist China and denies Taiwan its right to independence, despite receiving their help and sending to Taipei a plane belonging to government-owned airlines for the first time in history. Our community released a special statement on this issue:

Taiwan helps Poland with the pandemic. And the Law and Justice government insult Taiwan, calling it part of communist China!

As the New Covenant Church of Lublin, we issued a lawsuit against the Communist Party of China for the impediment to church-life caused by the Chinese virus pandemic. Most likely, we are the first church in the world to take such action.

Also, we made a significant progress in the area of evangelizing liberal Catholics centered around a Dominican priest, who is popular on the Internet and uses Pope Francis as a role model. He perfidiously manipulates the Bible and the truth. By doing this he deceives Catholics and some of the ecumenically oriented Protestants. About 60,000 people have viewed one show about him and over one thousand comments have been made under all the shows collectively. Pray for these poor, lost Catholics, who live with the sense of self-righteousness, that Jesus will open their eyes.

In April, the Against the Tide radio, which broadcasts 24 hours a day, was enriched by a few new programs. We are especially pleased with the evening radio-show for children. Our YouTube channel (the previous one has been blocked) has already over 30,000 subscriptions and the total of over 20,000,000 views of the videos.

A strong interest in the gospel can be observed in the community of Polish artists and fans of rap music. Many of them watch our TV. This month, we had interviews with two rappers, who openly acknowledge Jesus. Pray that the gospel will touch especially the hearts of young people.

In May, we would like to launch our new studio. Pray for a success in finishing the necessary work despite the pandemic.

QUARANTINE WITH THE BIBLE

You don’t have to die! [ANIMATION]

QUARANTINE WITH THE BIBLE

You don’t have to die! [ANIMATION]

Statement by the New Covenant Church in Lublin on the trial...